AeroShell Grease 33 is a synthetic universal airframe grease composed of a lithium complex thickened synthetic base oil with corrosion and oxidation inhibitors and load carrying additives. 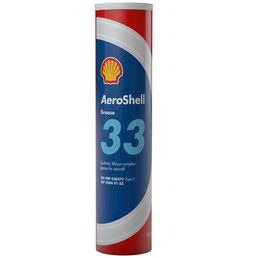 For many years aircraft operators have been seeking to rationalise the greases used on aircraft and to reduce the number of different greases in their inventories. Recently Boeing began research on a new, general purpose, corrosion-inhibiting grease. The aim was for a non-clay based grease that would provide longer life for components and mechanisms and possess improved wear and corrosion resistance. This led to the introduction of the new Boeing Specification BMS 3-33.

Owing to the wide range of operating temperatures, loads and other environmental conditions required for various aircraft components, several different types of grease with different desirable properties are used during routine lubrication of aircraft components. Boeing, in developing their BMS 3-33 specification, took account of the properties of the different grease types used on aircraft and wrote a specification for a grease which would provide improved performance and which could be used in the widest possible range of grease applications. That performance level has largely been adopted as the SAE AMS 3052 specification, which is in turn the basis for the Airbus AIMS 09-06-002 specification.

AeroShell Grease 33 is approved to BMS 3-33B and offers the improved performance properties required by this specification and the other specifications mentioned above.

AeroShell Grease 33 can be used for routine lubrication in applications where MIL-PRF-23827C is specified on aircraft manufactured by McDonnell Douglas, Airbus, BAe Regional Aircraft, Canadair, Lockheed, Embraer, Fokker and Gulfstream (except for wheel bearings, applications above 121°C and sliding applications requiring molybdenum disulphide).

Other aircraft manufacturers are evaluating AeroShell Grease 33 with the aim of approving it for use on their aircraft. Operators should regularly check with these manufacturers for the latest status.

Use of AeroShell Grease 33 can provide operators with the following benefits:
- Reduced inventories
- Easier maintainability (one major grease for most applications)
- Reduced maintenance labour costs
- Less chance of product mis-application

AeroShell Grease 33 contains a synthetic oil and must not be used with incompatible seal materials.