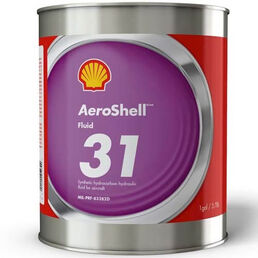 AeroShell Fluid 31 is recommended for use in aircraft, ordnance, and missile systems operating from –40°C to +205°C. This fluid should be considered for use in auto pilots, shock absorbers, brakes, flight control systems, hydraulic servo-controlled systems and other systems using synthetic elastomer seals.

An increasing number of aircraft manufacturers now recommend use of this type of fluid in aircraft hydraulic systems in preference to mineral hydraulic oils. This move has been prompted by the need to use fluids with better fire resistant properties.

AeroShell Fluid 31 is a synthetic hydrocarbon oil and should not be used in contact with incompatible seal materials.

Chlorinated solvents should not be used for cleaning hydraulic components which use AeroShell Fluid 31. The residual solvent contaminates the hydraulic fluid and may lead to corrosion.